The spirit in question takes the form of a young man with no head (or strange shapes) under an Oak tree near the creek (of which there is no creek).  The spirit is believed to belong to an unidentified young man whose body was found, minus his head, in 1825.  Supposedly the head was not simply cut off by a sharp instrument but instead was forcibly removed.  There was too little blood at the scene which led authorities to believe he met his end elsewhere and his body dumped in the cemetery.  There is a theory that the lack of blood may also have given rise to the account of the head being forcibly removed instead of cut, as if ripped from the body.

As with so many other stories, with little to go on authorities were not able to solve the mans death or identify anyone responsible.  On some nights, the spirit appears under the tree, in hopes someone may one day identify him and bring his spirit to rest.

It is worth noting there is no cemetery by this name in the county in question and the only one that somewhat resembles it does not have a creek.  No one knows what day, or month, or season on 1825 the body was found and there were no accounts in the news which I have been able to find.  I could find some information about decapitation in Adams county.  Taken from the History of Adams County:

Structural peculiarities of the skulls point to a similarity of the Mound Builders with the Hindoos of the present day and with the ancient Peruvian races. The occasional presence of decapitated bodies in the serpent mound graves, or a bodyless skull, indicates that head hunting, even as it is now practiced among the Dyaks of Borneo, existed in those earlier days. Traces of paints occasionally are found on the disinterred 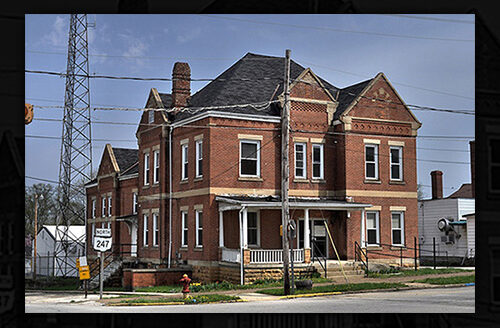